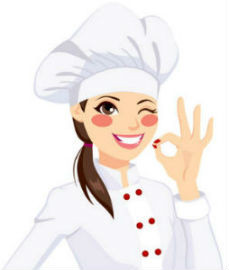 Is it just me, or does the SM-55 Cuisinart stand mixer remind you of a sewing machine? Maybe I love my Artisan’s retro look so much that I can’t see beyond it. On the other hand, rabid fans don’t seem to care one way or the other about its appearance.

With its sleek design and clean lines, this Cuisinart 5.5-qt stand mixer clearly vies for attention, and what better way to achieve that than by making yourself the hub of activity in the kitchen?

We may earn a commission at no cost to you when you buy via affiliate links on our site.

Motor: This is where this Cuisinart mixer truly shines. Featuring a powerful 800-watt motor housed in durable die-cast metal housing, the Cuisinart SM-55 certainly has the power to handle the most demanding mixing tasks thrown at it, including heavy dough. Hope that got your attention: I can see the Breadmakers’ Brigade grinning like the proverbial cat that got the cream! 😉

Bowl Capacity: A 5.5-qt brushed stainless steel bowl provides enough capacity to accommodate large quantities (think double or even triple recipes). In one go, it can mix 12 cups of flour (yeast dough), 10 dozen cookies, 6 cups of whipping cream, or 12 egg whites – not too shabby! Two handles to make it easier to hold the bowl while scraping or removing contents. A bowl pad slipped under the bowl prevents it getting wedged with use and makes it easier to remove.

Mixing Speeds: The Cuisinart SM-55 stand mixer offers a selection of 12 speeds. A slow-start function assists in eliminating splatter for the most delicate ingredients, while an ultra-gentle fold function provides two options: blend delicate ingredients with the continuous option, or combine with the pulse option.

Timer: Another nifty addition to Cuisinart stand mixers is the 15-minute countdown timer with automatic shutoff which conveniently frees you to tend to other tasks without worrying about time. The On/Off button is useful for foods that do not require a lot of mixing.

Accessories: Included with the Cuisinart SM-55 stand mixer are four accessories: a chef’s whisk, a flat mixing paddle, a dough hook (with non-stick coating) and a splashguard with pour spout to help prevent splatter. The splashguard very cleverly attaches to the head of the Cuisinart stand mixer so it’s out of the way when you lift the mixer head to reach into the bowl; a wide spout lets you add ingredients while the mixer is running. 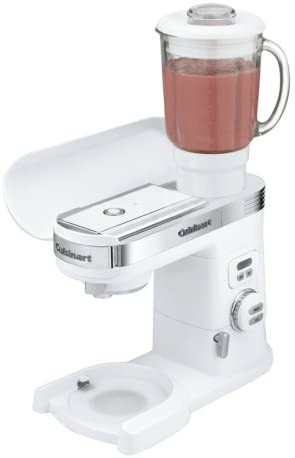 The Cuisinart SM-55 clearly drags behind the KitchenAid Artisan in terms of number of reviews, users are generally very happy with this appliance’s strong points. While some feel that it lacks the KitchenAid mixer’s solid, all-metal feel they are accustomed to, others find the bowl too narrow and the double handle not user-friendly. Also, the ‘inverted umbrella’ design means some ingredients can get trapped on top of the dough hook and whisk shield, and the beater sometimes falls off the unit when trying to remove batter with a spatula.

The power outlet location on top of the appliance is not ideal, with the top of the blender attachment reaching almost two feet above your counter top – which pales in comparison with what a lid malfunction might entail: margarita mix in power outlets…!

While those who have had no problem with their SM-55 mixer praise the three-year product warranty, some less lucky owners are unimpressed with Cuisinart’s customer service. 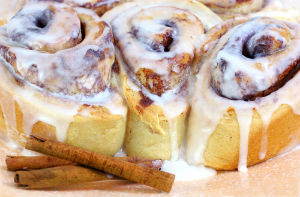 Many Cuisinart SM-55 stand mixer owners are extremely satisfied with their choice, with the majority giving it a high rating. They are particularly impressed with the power of their mixer and its ability to handle making dough. So if you have a passion for home baked bread or pizza (or maybe cinnamon buns), there may yet be a Cuisinart sous-chef in your future…!